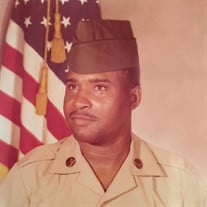 DORCHESTER – Trevor Clive Charlton, Sr., 68, of Dorchester, went to be with the Lord on September 15, 2017. Born on October 20, 1948 in Mitchell Town, Clarendon, Jamaica, West Indies, he was the son of Myrtle Whorms and the late Lascelles Charlton, Sr. and the older twin to his sister Barbara (Charlton) Richards. He was schooled in Mitchell Town, Jamaica. He was employed at Monymusk Sugar Factory and Alcoa Bauxite Company in Hayes, Clarendon, Jamaica. He migrated to the United States in the year of 1978. He worked at General Electric in Lynn, MA as a Parts Distributor and retired after 27 years in 2008. Trevor enlisted in the United States Army National Guard on December 6, 1979 and was honorably discharged on December 5, 1984. During that time, he served active service from August 1980 to April 1981. On May 19, 1990 he married his beloved Marjorie (Ferguson) Charlton and the union produced two children. He came to know the Lord after marrying Marjorie and was a Deacon at the New Testament Pentecostal Church of God in Christ. He enjoyed praising the Lord, taking family trips and spending time with his loving grandchildren. He was a people person who thoroughly enjoyed giving and helping others. Trevor is survived by his wife Marjorie; his children, Maurice Charlton Sr. and his wife LaQuandra of Providence, Rhode Island, Trevor Clive Charlton, Jr. (Kirk) of Dorchester, Andrea Rose (Charlton) James and her husband Albert of Okinawa, Japan, Craig Alwayne Charlton (Kevin) of Dorchester, Natasha Alicia Charlton of Dorchester and Aaron Stephen Charlton of Dorchester, stepson John Charles Guy and his wife Shante of Brockton; his grandchildren, Maurice Jr., Tyrese, Shanice and Tanejah Charlton of Dorchester, Rayonna Carmeta Charlton of Walpole, Juvhon, Amber and Alex James of Okinawa, Japan, Journey Charlton of Dorchester, Ethan Prophete, Tiana Banks, Jahmiel Byfield all of Dorchester, Jamir and Jhane Guy of Brockton; his mother Myrtle Whorms; siblings Discelle Charlton, Sr. and his wife Enid of Malden, twin sister Barbara Richards and her husband Arnold of Dorchester, Eileen Bayliss and her husband Gozden of Mattapan; Patricia (Shaggy), Samoya and Louis Charlton of Jamaica, Mazie Charlton of Maryland, Susan, Elroy (Charlie), Beverley and Isaac Charlton of England, Lascelles Charlton of Canada and the late Peter Charlton of Jamaica; also many nieces, nephews, cousins, relatives and friends. Viewing will be held from 10 – 11am with service from 11 – 12pm on Wednesday, September 27, 2017 at the New Testament Pentecostal Church of God in Christ located at 86 Waldeck Street, Dorchester, MA. A graveside service with Military Honors will be held immediately following the service at Oak Lawn Cemetery located at 427 Cummins Highway, Roslindale, MA. A repast at the New Testament Pentecostal Church of God in Christ located at 86 Waldeck Street, Dorchester, MA will follow the graveside service.

DORCHESTER &#8211; Trevor Clive Charlton, Sr., 68, of Dorchester, went to be with the Lord on September 15, 2017. Born on October 20, 1948 in Mitchell Town, Clarendon, Jamaica, West Indies, he was the son of Myrtle Whorms and the late Lascelles... View Obituary & Service Information

The family of Mr. Trevor C. Charlton Sr. created this Life Tributes page to make it easy to share your memories.

Send flowers to the Charlton family.