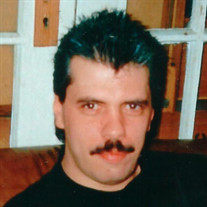 Robert “Bobby” Charles, 53, of Norton, formerly of Dorchester, passed away, Friday, April 1, 2016. He was the loving husband of Janice (Shields) Charles. Born on October 28, 1962 in Dorchester, he was a son of Florence (Vasseur) Charles and the late Gilbert Charles. Robert operated his own painting company and went wherever his passion took him. He loved animals, cooking, fishing, and was an avid New England sports fan. Most of all, he cherished the time he spent with his family, especially his grandchildren. He is survived by his children, Kristen Brown and her husband Matthew of Brockton and Nicholas Charles of Marlboro and Jana McLaughlin of Somerville and Joshua McKenzie of Marlboro, whom he brought up as his own; two grandchildren, Julianne and Isabelle Brown of Brockton; brothers, Gilbert Charles of Dorchester and Alan Charles and his wife Lois of Weymouth; sisters, Susan Nephew and her husband Michael of Raynham, Dorothy Dormady and her husband David of Brockton, Patricia Charles of Quincy and many nieces and nephews. A Memorial Visitation will be held on Friday, April 15, 2016 from 4-7pm in the McHoul Family Funeral Home 354 Adams St., Dorchester, MA immediately followed by a Memorial Service at 7pm in the funeral home. In lieu of flowers, donations in his name may be made to the Robert "Bobby" Charles Fund, c/o Citizens Bank, 50 S. Main St., Randolph, MA 02368, account number 1332918392

The family of Mr. Robert P. Charles created this Life Tributes page to make it easy to share your memories.

Send flowers to the Charles family.