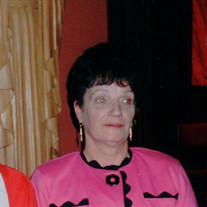 Norma Isabel (MacPherson) Corrigan, 79, of Boston, passed away, Tuesday, August 25, 2015 at Marian Manor in Boston. She was the wife of the late John “Frank” Corrigan. Born on May 11, 1936 in Inverness, Nova Scotia, she was a daughter of the late John and Mary Helen (MacDonald) MacPherson. Norma worked for many years as a hospice caregiver. She is survived by her children Beverly Connolly, James MacPherson, Pauline Doucet, Jean Marie MacNiel and Sandra Fraser, Robert Corrigan, Justin Corrigan and Jaycee Corrigan; 13 grandchildren, 2 great-grandchildren; sisters, Christina Richard and Diana Tardif and many nieces and nephews. She was predeceased by her siblings, Jackie, Alexander, Fulton, Lou and Pauline. Relatives and friends are invited to attend a visitation on Thursday, August 27, 2015 from 4 to 8 PM in the McHoul Family Funeral Home, 354 Adams St., Dorchester. Her Funeral will be held Friday, August 28 at 9AM from the funeral home, with a Mass of Christian Burial at 10AM in St. Ambrose Church, 240 Adams St., Dorchester. Burial in Cedar Grove Cemetery, Boston.

The family of Norma Isabel Corrigan created this Life Tributes page to make it easy to share your memories.

Send flowers to the Corrigan family.