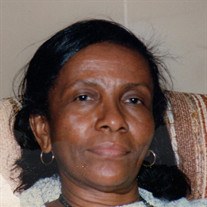 Mildred Iona Lawson, 5th child of Gilbert and Florence Gaynor, was born on March 26, 1930 in Clarendon, Jamaica. She married Astor Lawson in 1951; together they raised four sons, and had a marriage that lasted 63 years until Astor passed away in 2014. Mildred was blessed with a loving family that included her parents, her husband, five siblings, four sons, daughters-in-law, three grandsons, one great grandson and many nieces and nephews. She raised her sons with patience and discipline and had a unique understanding of their individual personalities, which resulted in excellent mother/son relationships. She will be dearly missed by her loved ones. Mildred was a learned person, who excelled in all of her scholastic endeavors. After successfully passing the entrance exam, she attended Kingston Technical High School, where she specialized in Mathematics, English and Spanish. After graduation, she furthered her education in commercial studies, and sat for the Senior Cambridge examination. She was the only one of twelve students in her peer group to pass the exam. This significant accomplishment gained her a promotion at the Jamaica Citrus Growers Limited Company where she worked for 25 years as office manager until she immigrated to the United States in 1972. Once in the United States she served as an accountant for 22 years at the Massachusetts Commission for the Blind. Mildred dedicated her life to Jehovah God and was baptized as one of Jehovah’s witnesses on January 18, 1997. She continued as a faithful servant for the rest of her life. She was an auxiliary pioneer and was dedicated in this role. Even on one of her worse days when she was in pain at the doctor’s office she gave another patient a Watchtower magazine because she still wanted to make known Jehovah’s purpose for all mankind. One of Mildred’s greatest passions was doing crossword puzzles. She started enjoying them as a child when her father would give her that section of the newspaper. For many years she endeavored to complete at least one puzzle a day. Mildred had a refreshing sense of humor, nurtured from a blissful childhood filled with many happy memories of play time with her siblings. She adored her older brother Clava who allowed her and her sisters to tag along and play games such as cricket and marbles which were usually primarily the domain of boys. She and her siblings would make sail boats and sail them in a nearby canal. Another favorite pastime was roasting cashew nuts outside on a camp fire. They would savor the rich aromatic smell that emanated from the burnt shell of the nut. In honor of her brother she named her youngest son Claver. Mildred is survived by her four sons, Gifford Lawson and wife Diane, Garfield Lawson and wife Jackie, Shawn Lawson and wife Sandra, and Claver Lawson; her three grandsons, Astor, Justin and Drew, and her great grandson, Dempsey. She is also survived by her eldest sister, Enid Gaynor, her youngest sister Brenda Smith, and all her caring nieces and nephews, to whom she is affectionately known as “Aunt Weezie.” In addition to her husband, she was preceded in death by her brothers, George and Clava Gaynor, and by her sister Violet Morgan.

Mildred Iona Lawson, 5th child of Gilbert and Florence Gaynor, was born on March 26, 1930 in Clarendon, Jamaica. She married Astor Lawson in 1951; together they raised four sons, and had a marriage that lasted 63 years until Astor passed away... View Obituary & Service Information

The family of Mildred Iona Lawson created this Life Tributes page to make it easy to share your memories.

Send flowers to the Lawson family.