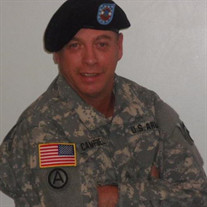 It is with sad hearts we announce the passing of our brother, Michael, after a long courageous battle with ALS, Lou Gehrig's disease. It was inspirational and really unbelievable to watch the way Mike continued to fight, never giving up and managing his own care up to the end. . Mike wouldn't have been able to do this without the help of the circle of caretakers that assisted him in living with this terrible disease.  Words cannot really express the appreciation to our cousin, Phillip Arsenault for believing in Mike’s vision of independent living and for being there every step of the way with him. Also on Mike’s Team of special caregivers are his sister Maryanne, his niece Melanie and his nurses Akkunna and Kathy.  We also appreciate the special friendships that were offered by his childhood friend Ritchie Corrado, Owen Kiernan, Sarge and Rudy who visited Mike and watched the Bruins, Patriots and Celtics that Mike so loved. Michael leaves behind 2 Sons Sean Campbell and Zachery Phillips Granddaughter Zoey, His sisters, Maryanne Moran, (Billy) Donna Stephens, (Butch), and Patricia Campbell (George). His nieces and nephews, Melanie, (Raphael) Michael, Danny Stephens, Kyle, Jennifer and Ingrid, Liam, Jayden and Emma. His Aunts, Uncles, cousins and family friend's. Son of the late Mary Bridget Lafford and Robert F Campbell, grandson of the late Lillian Campbell, brother of the late Robert Campbell and uncle of the late Paul Reagan who Mike had a special relationship with. Mike honored his culture being a Mik Maq (Mother) and Scottish/Irish (father). Sgt. Michael proudly served his country in The United States Army's during the Gulf War. Michael loved fishing, and cooking. He spent many years employed as a carpenter and he enjoyed watching his favorite teams,The Bruins, Patriots and Celtics either in person or on TV. Michael was an Honored Veteran for his service in the Army and at one very special Bruins game which he and Phil attended he was able to meet the players, and of course the Bruins Ice Girls. He loved the town he grew up in South Boston, loved to attend the St Paddy's Day parade while having a few with his friends. Many thanks to all friends, and family that checked in, called, or visited Mike.  Michael you were a trooper, and a true proud Mik Maq warrior to the end. Fly free now Mike on the wings of an eagle. May God Bless. Visitation will be held on Monday, April 4, from 4-7 p.m. in the McHoul Family Funeral Home, 354 Adams Street, Dorchester. A funeral Mass will be held on Tuesday at 10 a.m. in St. Mark’s Parish, 1725 Dorchester Ave, Dorchester. Burial with military honors will follow in the Cedar Grove Cemetery.

It is with sad hearts we announce the passing of our brother, Michael, after a long courageous battle with ALS, Lou Gehrig's disease. It was inspirational and really unbelievable to watch the way Mike continued to fight, never giving up and... View Obituary & Service Information

The family of Sgt. Michael Campbell created this Life Tributes page to make it easy to share your memories.

It is with sad hearts we announce the passing of our brother,...

Send flowers to the Campbell family.