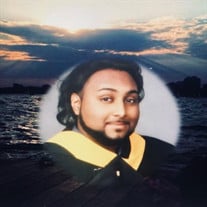 Marcellous A. Govind, age 22, of Dorchester, MA, suddenly passed away on January 15th at home. Marcellous was born to parents Linda R. Harkess and Saloman Govind on February 27th 1996, Marcellous was dedicated to the Lord at the Berea SDA church on October 12th of that same year. He was raised in Dorchester by his devoted mom and her family. Marcellous attended Berea SDA Academy where he quickly advanced in excellence in academia, professional, and personal growth. Marcellous was a natural born scholar, and was a recipient of numerous honor rolls, and presidential awards. With great determination, Marcellous took the Independent School Entrance Exam (ISEE) and was invited to further his studies at the Boston Latin Academy (BLA), where he graduated Class of 2014. Marcellous went on pursing his lifelong dream of becoming a scientist at Suffolk University, Boston, MA where he graduated Class of 2018, with a Bachelor of Science (BSN) and a concentration in Biotechnology. Later that year, Marcellous joined the Harvard Medical School in Cambridge, MA as a Laboratory Specialist. Marcellous is survived by his parents, his grandmothers Ishvari Harkess, Sabita Setaram and Doris Govind, his aunts: Christina Harkess, Normaliz Acosta-Setaram, Beatrice Diaz-Harkess, and Gaytri Mangar. His uncles: Joshua Harkess, Marvin Harkess, Rajesh Setaram, and Mahendra Mangar, his: cousins Priscilla, Jared, Jolina Mahabali, Isabella, Camila, and Jeremiah Harkess. In addition, he is survived by an enormous network of extended family that have positively impacted his life especially; the Baichoo, Harkess, Mangar, Applewaithe, Badrinarain, Gocool, Fontes, Lewis, Guiles, Dillard, Poleon, Maharaj, Setaram, Jenkins, Williams, Dukhia, Berea and the late Bootman families. Service Venue : Berea SDA Church 108 Seaver Street, Dorchester MA 02121 Viewing : Monday 1/21st 10-11:30 am proceeded by Funeral Service Final Viewing: Tuesday 1/22nd 9-11am McHoul Funeral Home 354 Adams Street, Dorchester, MA 02122 Interment: Forest Hills Cemetery where his body will be laid to rest in the Garden of Enduring Love. In lieu of flowers, donations may be made in his memory to the Berea SDA Church 2020 Fund. “And let them make me a sanctuary; that I may dwell among them.” Exodus 25: 8 (KJV)

Marcellous A. Govind, age 22, of Dorchester, MA, suddenly passed away on January 15th at home. Marcellous was born to parents Linda R. Harkess and Saloman Govind on February 27th 1996, Marcellous was dedicated to the Lord at the Berea SDA church... View Obituary & Service Information

The family of Mr. Marcellous A. Govind created this Life Tributes page to make it easy to share your memories.

Send flowers to the Govind family.