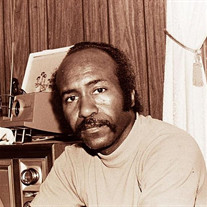 The Lord has called home one of his flock. Jesse Raphael Dove better known as Raphael ”Ray" Dove has heard the drums and has gone home. This son, brother, husband, father, grandfather and great grandfather shall truly be missed. Although his voice is now silenced, his memory will continue to guide, nurture and influence us throughout our lives. Ray was born on July 21st, 1935 in Brooklyn New York to proud parents Raleigh and Minnie Dove. As the son of a man of the cloth, he was raised with strict Christian values. Mr. Dove was the youngest of five siblings. He always strived to do his best and live up to the highest of expectations. Upon graduating high school he attended one year of community college and studied Electrical Engineering a field where he found his passion. In 1960 he was honorably discharged from the US Army, and furthered his education at Pratt Institute in Brooklyn, New York. Upon graduating he stayed on at Pratt, working in the science lab. It was during this time that he was reunited with an old acquaintance, Sylvia Nathan who in 1964 became his wife and mother of his 3 children. By 1966 he was working at Brooklyn Collegiate and Polytechnic Institute with a growing family looking to move from the city. In the summer of 1968 Ray accepted an electronic technician’s position at Massachusetts Institute of Technology. Working in the electronics field he continued to excel, leading several projects designed to improve electrical distribution and efficiency. With his family settling into their new home in Saugus his career blossomed. By the early 80s Ray became an instructor in the Chemistry department, where he remained for 39 years until his retirement in the summer of 2007. Raphael’s other passion in life was photography. During most events he could be seen always in pursuit of the perfect shot. His collection includes shots of the World Trade Towers construction, the Tall ships and Constitution sailing in Boston harbor, and many air shows. He also was an avid lover of jazz and classical music. Jesse Raphael Dove is survived by his only wife Sylvia (Nathan) Dove Robichaud and his three children; Michael and Wanda Dove of Hampden ME, Marc Dove of Boston, Tania (Dove) and John LeBlanc of Saugus, and six grandchildren, Nicole, Brittany, Anthony, Joseph, Isaiah and Joshua and one great granddaughter Tatyana Ray is survived by one sister Helen Jean (Dove) Crawford of Dorchester, MA He was preceded in death by his brothers James R Dove, William Dove; sisters, Ruth Jones and Margie Young, He is survived by a host of nieces, nephews, cousins and other relatives and many friends. John 3:16 "For God so loved the world, that He gave his only begotten Son, that whosoever believeth in him shall not perish, but have everlasting life Services will be held at: People's Baptist Church, 134 Camden St. Boston MA at the corner of Tremont St. on June 5th 2015 at 12 p.m. The burial will take place at the Chattanooga National Cemetery in Tennessee late August, 2015. Interested parties are encouraged to inquire.

The Lord has called home one of his flock. Jesse Raphael Dove better known as Raphael &#8221;Ray" Dove has heard the drums and has gone home. This son, brother, husband, father, grandfather and great grandfather shall truly be missed. Although... View Obituary & Service Information

The family of Mr. Jesse Raphael Dove created this Life Tributes page to make it easy to share your memories.

The Lord has called home one of his flock. Jesse Raphael Dove...

Send flowers to the Dove family.