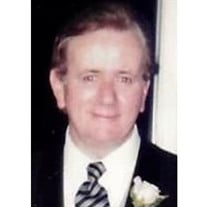 AVON – James F. Sullivan Sr., 76, of Avon, formerly of Dorchester, passed away on March 10, 2017. Born on March 3, 1941 in Boston, he was a son of the late Martin and Mary Agnes (Murphy) Sullivan. James was raised and educated in Boston and was a graduate of South Boston High School. He enlisted in the United States Marine Corps out of high school and proudly served his country for over 4 years. James worked as an auto body technician in the Boston area for several years. He enjoyed drawing, model airplanes and trains and spending time with his loving grandchildren. He is survived by his children, Dena Hurlebaus and her husband Thomas of Charlotte, NC, Marlisa Jones and her husband Ronald of Miesau, Germany and Dan Sullivan of Dorchester; his grandchildren, Joy and Shira Hurlebaus both of Charlotte, NC, Evelyn Mae and Alaina Belle Girard both of Miesau, Germany and Heidi and Martin Sullivan both of Dorchester; also many nieces and nephews. He was the father of the late James F. Sullivan Jr. and brother of the late Maureen Higgins and Martin Sullivan. Visitation will be held from 4 – 8 pm on Thursday, March 16, in the McHoul Family Funeral Home, 354 Adams Street, Dorchester, MA. A graveside service with Military Honors will be held at 11 a.m. on Friday, March 17 at the Fern Hill Cemetery, High Street, Hanson.

The family of Mr. James F. Sullivan Sr. created this Life Tributes page to make it easy to share your memories.

Send flowers to the Sullivan family.