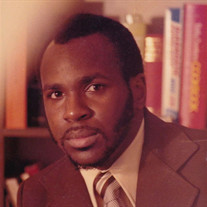 James Wiley Brooks the fourth youngest of six children was born to the late Pastor Noah and Semoria Brooks in Chattanooga, Tennessee. His brothers Noah, Howard, David, sister Omega and the late John Brooks. He was born September 9, 1950 in Chattanooga, Tenn., baptized, July 25, 1964 in Youngstown, Ohio by his own father Noah Brooks. As a young man he lived in Philadelphia and served as a Deacon at the Church of God 7th day in Philadelphia Pennsylvania and also in Ohio. As a young boy in his teenage years James was a hard worker, an inventor and an entrepreneur. He loved to find ways to bring money home to his large family. One day the workers at the local newspaper company went on strike. James, as the person he is, at this young age went to that newspaper company and bought a big stack of papers and sold them for double the price. That same winter the rest of the family followed his lead and much money was made from James' example. Many times James was the one to fuel the family with excellent business ideas and to bring in a good income. He also came up with many inventions that exist today. He would make money doing almost anything. He would cut grass in the summer and shovel snow in the winter. He loved to come up with many ideas and inventions particularly in his career field of plumbing. He was a plumber by trade and he loved to work in the City of Cambridge. He also enjoyed playing tricks on his siblings like scaring them with rubber critters, such as rubber snakes, spiders and mice so that he can get a good laugh. One winter he went a few notches above rubber critters and actually bought a green lizard home from the pet store intending to raise it as his pet. The lizard didn’t go over well with his parents. So, James was told to take the lizard right back to the pet store. James married Ruby Hamilton on October 14th 1979. They had five beautiful children. Naomi, Steven, Tabitha, Faith and Joel. He was also a very proud grandfather to Rahmani, Anias, Avah and Moziah. He love to tell people about his family and was very proud of his children. He loved to visit family and friends in the hospital and on some occasions making biweekly trips to visit loved ones. Visitation will be held on Friday, April 29, 2016 from 5-6pm in the McHoul Family Funeral Home 354 Adams St., Dorchester, immediately followed by a funeral service at 6pm in the funeral home.

James Wiley Brooks the fourth youngest of six children was born to the late Pastor Noah and Semoria Brooks in Chattanooga, Tennessee. His brothers Noah, Howard, David, sister Omega and the late John Brooks. He was born September 9, 1950 in... View Obituary & Service Information

The family of Mr. James W. Brooks created this Life Tributes page to make it easy to share your memories.

Send flowers to the Brooks family.