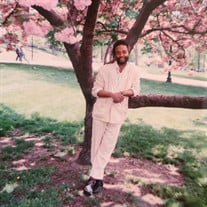 On December 3, 1959 in Port au Prince Haiti Marie-Marthe Carries and Jean Francois Carries gave birth to their son Gerald Jean-Francois Carries. In 1964 at the young age of 4 Gerald along with his Family moved to the United States and established a home in New York. He spent most of his youth in New York, but at the age of 14 Gerald moved to Boston with his mother, stepfather, and three sisters. During his adolescent years in Boston he graduated from Horace Mann Junior High in 1974, where he was known for his athletic abilities on the basketball and soccer team and attended Keefe Tech High School in Framingham, Massachusetts then later transferred to and completed his education in Machinery at the American School for the Deaf in Connecticut in 1978. As a young man Gerald frequently lived and traveled between Boston and New York to find work, pursue higher education, and to socialize with friends and family. In 1984 he met Sandra Bass while they both attended LaGuardia Community College in Long Island City, New York. In 1990 at the age of 31 Gerald, alongside his friends Leslie Cox and David Steele, founded the Boston Chapter of the National Black Deaf Advocates. Their mission was “to promote leadership development, economic, and educational opportunities, social equality, and to safeguard the general health and welfare of black, deaf, and hard of hearing people''. Later that year on August 25, 1990 Gerald married Sandra and from this blessed union came four wonderful Children Gerald Jean Francois Carries Jr. (1991), Ashley Marie Carries (1993), Akiv Jerold Carries (1997), and Patrick Oscar Carries (1998). Together they moved back to Boston and became homeowners in 2002. He continued working as a Mechanic during this time. Gerald and Sandra would remain married for 18 years before their eventual divorce in 2009. Gerald joined his mother in Tampa, Florida before his divorce and remained in Tampa until 2015 when he was diagnosed with hypertension and renal failure. To be closer to family he returned to Boston for medical treatment where he would ultimately be cared for by his ex-wife and Children. Due to Renal Failure he began dialysis treatment and on Tuesday April 20, 2021 Gerald succumbed to renal failure during treatment. During his life Gerald was a mechanic who was very passionate about cars. He would even go as far as to completely take apart and rebuild a few cars of his own. He was an avid movie collector who would rarely purchase movie tickets, but rather purchase a DVD on the day of release. He could have put the Blockbuster to shame with his massive collection of movies. He was a sports fanatic who always had a hat or t-shirt to represent his favorite sports teams. He also loved music so deeply that he would play the music as loudly as possible to feel the bass and every vibration. Gerald was beloved by many both in and out of the deaf community. He was animated, charismatic, and an all-around great person to be with. He will be missed by many friends and family, but he is at peace now and he will be remembered as a sweet son, a big brother, a caring father, and dear friend. Along with his Children and Ex-wife Gerald Carries is survived by his Mother Marie-Marthe Halverson, his Father Jean Francois Carries(Kathy Carries), his Sisters Emmeline Holmes, Barbara Riggs(Ronald Riggs) and Marie Nunes(Frank Nunes), his Aunts, Paule Duchemin, and Raymonde Argant, his Nieces and Nephews Brandon Holmes, Avery Riggs, Amber Riggs, Raven Riggs, Gabriella Nunes, and a host of loved cousins.

On December 3, 1959 in Port au Prince Haiti Marie-Marthe Carries and Jean Francois Carries gave birth to their son Gerald Jean-Francois Carries. In 1964 at the young age of 4 Gerald along with his Family moved to the United States and established... View Obituary & Service Information

The family of Gerald Jean-Francois Carries, Sr. created this Life Tributes page to make it easy to share your memories.