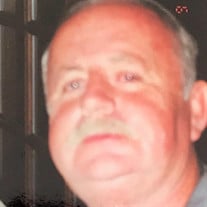 DORCHESTER- Eugene “Mac” F. McAuliffe, 70, of Dorchester, passed away on Sunday, April 28, 2019 at Beth Israel Deaconess Medical Center in Boston. He was the beloved husband to Deborah E. (Hill) McAuliffe. Born in Boston on August 16, 1948, he was the devoted son of the late Eugene F. McAuliffe Sr. and Margaret (Mallone) McAuliffe and the late brother Thomas McAuliffe, also of Dorchester. Eugene was a hard-working, honest man who always put his family first. He instilled in his children a can-do spirit, a strong work ethic and sense of responsibility. He worked as a taxi driver in the city of Boston, most often working in Dorchester. He earned the reputation of being a great cab driver and many loved his good humored personality and reliability. His frequent passengers and co-workers gave him the nickname “Mac.” In his spare time, Eugene loved to garden. He also enjoyed playing pool and when he was younger, he liked to play basketball. He took great pride in how his yard looked, along with the physical appearance of his house. Eugene was always working around his home and being a “jack of all trades.” He was always enthusiastic and willing to tackle any project. A life-long and proud member of his Dorchester community, Eugene was instrumental in forming and maintaining the Puritan Avenue Civic Association, a group of residents dedicated to improvement and beautification of the neighborhood, and fostering a collective spirit. In addition to his dear wife, Eugene is survived by his 3 cherished daughters, Stephanie M. McAuliffe-Bennett, Angela L. McAuliffe, and Jennifer C. McAuliffe; his 3 grandchildren, Cheyenne H. McAuliffe, Angelique McAuliffe, and Chichono McAuliffe; also many in-laws, nieces, nephews, cousins, and loyal passengers. Relatives and friends are invited to attend a visitation on Friday, May 3, 2019, from 4:00-6:00 pm, immediately followed by a funeral service at 6:00 pm at the McHoul Family Funeral Home, 354 Adams Street, Dorchester. Burial will be private.

The family of Mr. Eugene "Mac" F. McAuliffe created this Life Tributes page to make it easy to share your memories.

Send flowers to the McAuliffe family.