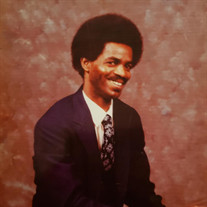 David Matthew Fenton was born on the beautiful island of Montserrat, West Indies to John Matthew Fenton and Ann Francis Weekes on March 1, 1952. He attended St. Johns School in the North of Montserrat. In 1972 he joined the Royal Montserrat Police Service where he served until 1978. In 1979 he joined the Tortola Police Service in the British Virgin Island where he served until 1980. David moved to the United States in 1980 and worked with Security Management Services from 1981 to 1986. He then joined Filenes Store as a security guard and remained there until 2003, when the store closed its doors. Later he worked for Hilton Hotel Corporations from 2003 until 2007 when he became disabled to work. However, David was a comedian at heart and even when he was in excruciating pain, he will move from one topic to another in such a humorous way, sometimes, somewhat colorful, but all his family and friends had a belly full of laughs before leaving him, whether visiting in person or on the telephone. He loved watching documentaries and the Cooking Channels on television and would bake and cook up a storm from recipes he liked and some from memory such as coconut tarts. David loved life and was extremely kind and independent. He exemplified strength and character throughout his long illness, and the one thing that all of us can take away from his life is that he complained very little or wasted time “thinking why me”. May He Rest In Eternal Peace. David leaves to cherish his loving memory, his son Dave and granddaughters Jada and Janelle, and Ellen Fenton; his sister Gertie and family in Curacao; his brothers James, Joe, Beresford Cabey (Penda) and Leroy Bramble, his nieces Doreen, Dawn and Nell, nephews Richard, Albert, Glanville, Irwin, Perry and Kerry; his aunt Catherine; cousins Ethlyn and family, Audry and family, Tina and family, Janet, Judith and family, Henry Fenton, Eleanor Silcott and family, Ralston Allen and many more extended family members too numerous to mention; many good and supportive friends, Irene Prospere, Howard Thompson, Stanley Greenaway and Ivan Fenton, to name a few. A special thank you to the Allen and Fenton Families, who supported David throughout his entire illness. A memorial visitation for David Matthew Fenton will be held on Saturday, August 8, 2020 from 10-11 a.m. in the McHoul Family Funeral Home, 354 Adams Street, Dorchester. A funeral home service will immediately follow the visitation at 11 a.m. For the safety of those who wish to pay their respects, please do so in accordance with CDC, Federal and State guidelines including social distancing and the use of face masks. Burial will take place privately at a later date.

The family of Mr. David Matthew Fenton created this Life Tributes page to make it easy to share your memories.

David Matthew Fenton was born on the beautiful island of Montserrat,...

Send flowers to the Fenton family.