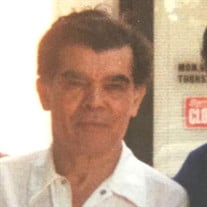 Crescencio "Chemo" Borrero, 92, of Dorchester, passed away surrounded by his loving family on Tuesday, December, 10, 2019 at the Bostonian Nursing Home, Dorchester. Born on January 25, 1928 in Laras, Puerto Rico, he was the son of the late... View Obituary & Service Information

The family of Mr. Crescencio "Chemo" Borrero created this Life Tributes page to make it easy to share your memories.

Send flowers to the Borrero family.