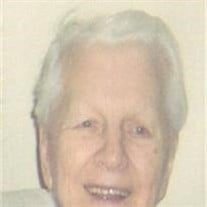 C. Irene (Piotrowicz) Mazerall, 95 years old, formerly of Robinson Street, Dorchester, more recently of Compass on the Bay in South Boston, died the 16th of November 2012. She was born in South Boston to the late Stanislaw & Boleslawa (Zasonska) Piotrowicz and grew up in Dorchester. She was predeceased by her husband of 56 years, Leo H. Mazerall Sr., her brothers James, Boleslaw, Edward, Stephen, and Theodore, as well as sisters Leocadia and Jean. In life, Irene worked as a LPN in the maternity ward at St. Margaret’s Hospital, was an active member of the Dorchester House, participated in senior citizens groups, and donated to numerous charities. Outside of giving back to her community and family, Irene had many loves in life. She loved walking along the beach, feeling the ocean breeze against her skin, a glass of wine in the evening, and bowling. She is survived by her 5 children: Leo Mazerall Jr. of Stockton Springs, ME, Irene O’Brien of Georgetown, Anne Asdot of Scituate, Janet Mazerall of Georgetown, and Michael Mazerall of Dorchester. In her passing, Irene leaves behind 10 grandchildren, 9 great-grandchildren, and 3 great-great-grandchildren, as well as a multitude of nieces and nephews.

The family of C. Irene Mazerall created this Life Tributes page to make it easy to share your memories.

Send flowers to the Mazerall family.