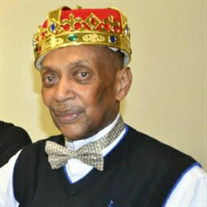 Augustus Corbin, known as "Gus" or "Telbert", passed away on Thursday, March 31, 2022 at home in Boston, Massachusetts. Affectionately called the "Mayor of Boston’s Guyanese community", he was 83 years old. Born on March 21, 1939 in Georgetown, Guyana, he was the eldest of 3 children to Nathaniel and Agnes Corbin. Augustus began working at a very young age to support his family, after the death of his father. He worked at the Argosy Newspaper Company and West Indian Shipping, where he traveled to numerous countries. He served as a photographer in the Guyana Defense Force (GDF). He also attended the Pitman Institute, where he studied Bookkeeping and English. After immigrating to Boston with his family in 1985, he became involved in the Caribbean community as a Freelance Photojournalist, covering many events. He wrote articles for the Dorchester Community News, where he was a volunteer journalist, the Jamaica Gleaner, and Guyana Entertainment Magazine (GEM). In 1996, he became one of the founding members of the Guyana Friends of Massachusetts, where he served as president for two years. After retiring, Augustus became a Vestry Member of St. Mark's Episcopal Church. He is survived by his wife of 56 years, Bridget, and five children, Simeon, Kenneth, Coretta, Sean, and Michelle; his seven grandchildren, Rebecca, Alonzo, Cierra, Brianna, Arielle, Prince, and Princianna; son-in-law, Claude Rival and daughter-in-law, Patricia. Visitation will be held at McHoul Funeral Home, 354 Adams Street, Dorchester, MA 02122 on April 10th from 12:00 PM to 4:00 PM all are welcome to attend. A Celebration of Life Service will be held at St. Mark's Episcopal Church, 73 Columbia Road, Dorchester, Massachusetts, on Monday, April 11th, from 10:00 AM -11:30 AM . The interment will follow at Cedar Grove Cemetery, 920 Adams Street. Dorchester Center, Massachusetts. The Repast will be held at Unity Sports & Cultural Club, 10 Dunbar Avenue., Dorchester, Massachusetts. In lieu of flowers, the family asks that donations be made in memory of Augustus to the Pine Street Inn at https://www.pinestreetinn.org/ or St. Marks Episcopal Church at https://www.diomass.org/parish/dorchester/st-marks-church.

Augustus Corbin, known as "Gus" or "Telbert", passed away on Thursday, March 31, 2022 at home in Boston, Massachusetts. Affectionately called the "Mayor of Boston&#8217;s Guyanese community", he was 83 years old. Born on March 21, 1939 in... View Obituary & Service Information

The family of Mr. Augustus "Gus" Corbin created this Life Tributes page to make it easy to share your memories.

Augustus Corbin, known as &quot;Gus&quot; or &quot;Telbert&quot;, passed away on...

Send flowers to the Corbin family.