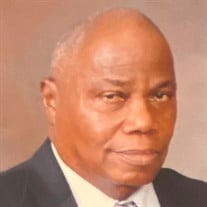 On Monday, March 29, 2021, after a lengthy battle with illness, Alric Arlington Johnson, Jr., was called home to be with the Lord. “Junior,” as he was lovingly called by family and friends, was born on August 18, 1934, in La Ceiba, Honduras, Central America, to Beatrice Jeffers Smith Johnson (deceased) and Alric Arlington Johnson, Sr. (deceased). He attended public school in La Ceiba until the age of 14, when he left his home to become a merchant seaman. He loved sea life and was an avid swimmer. At the age of 20, he and Emelina Frederick (Newell) welcomed their firstborn child, Sally Ann Johnson (Darville), born in Guanaja, The Bay Islands of Honduras. Later Junior settled in Nassau, Bahamas, living and working for several years prior to immigrating to the United States. His love of the sea followed him to the Bahamas, where he became the cook and captain of a small vessel called the Alpha. “Cap,” as he became known by visitors to the island, helmed the Alpha to conduct tours to many of the outer islands of the Bahamas for scuba diving, spear fishing and sunbathing. During his life there, he became the father of 5 boys: Rolando, Albert (deceased), O’Conner (deceased), Dexter (deceased) and Daniel. He ensured that the boys attended church every Sunday and instilled in them the importance of education. He eventually moved to the United States to join his mother and family. He worked in several places, including the New England Medical Center, Mass Eye and Ear Infirmary, Faulkner Hospital, and later retired from Boston Public Schools. On November 3, 2003, he married his loving wife Georgetta Cecille Edwards (Johnson). Junior’s faith in the Lord was the guiding light of his life. For 25 years, he served as a faithful and active member of Greenwood Memorial United Methodist Church in Dorchester, MA, where he was respectfully known as “Mr. Johnson.” He cherished his role as a Trustee and dedicated himself to maintaining and sustaining Greenwood Memorial for future generations. Even after Mr. Johnson left the Trustee Board, he worked to care for the building, often making church repairs. He participated in the United Methodist Men of Greenwood. When the Hispanic Ministry Choir participated in worship, he joyfully sang the hymns of the church. He also enjoyed the church's activities, such as dinners and bus trips. Most of all, Junior adored his family with whom he shared the fruits of his favorite past time: cooking and baking. He was well known for his famous rice cakes. He also enjoyed dancing and family gatherings. He leaves to mourn and cherish his memories, his loving wife Georgetta Johnson; his daughter Sally Darville; his sister Ida K. Allen; and his two sons, Rolando of Nassau, Bahamas, and Daniel of Orlando, FL. Memories of him also will be cherished by 6 grandchildren: Barry Shawn (BJ), Elmina Darville (Mina), Chardanique (Chardy), Eitanique (Eity), and Johnacio and Courtney of Nassau, Bahamas; 6 nephews: Alston Allen, Arturito Leonard Johnson of New York, Tony (deceased), Martin, Andrew, and Danilo Johnson of Texas; 4 nieces: Ida D. Allen, April Noel, Suyupa Allen and Brenda Major Johnson of Florida; 7 Great-grandchildren: Sharai Holley, Curtis, Daivion, Niyana Darville, Dariel Santos; and Chardonnae and De’Char Johnson; many grand and great-nieces and nephews. Relatives and friends are invited to attend visitation on Wednesday, April 7, 2021 from 10-11 AM at McHoul Family Funeral Home, 354 Adams Street, Dorchester, MA. A Service will be conducted at 11 AM. Burial will follow at Oak Lawn Cemetery, Boston. For the safety of those who wish to pay their respects, please do so in accordance with CDC, Federal and State guidelines including social distancing and the use of face masks. For the Livestream viewing of the Service at 11 AM, please click the following link: https://my.gather.app/remember/alric-johnson

The family of Mr. Alric A. Johnson Jr. created this Life Tributes page to make it easy to share your memories.

Send flowers to the Johnson family.