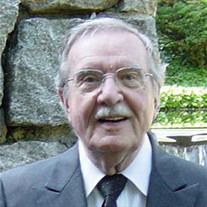 NORTH ATTLEBORO – Alexander Fraser McHoul passed away on Sunday, March 13, 2016 in his 99th year of life surrounded by his loving family. He cherished over 72 years of marriage to Mildred (Hennessy) McHoul before her death in 2009. Born October 18, 1917 in Boston, he was a son of the late David and Mary (Robertson) McHoul. Al was a lifelong resident of the Dorchester neighborhood of Boston before moving to North Attleboro in 2002 to be closer to his family. He earned a degree in funeral service and embalming from what is today New England Institute when it was in Boston and he later served as an instructor of embalming there for many years. Al was the founder of the “McHoul Family Award” at NEI which is now part of Mt. Ida College in Newton. He founded McHoul Funeral Home in Dorchester in 1950 and later owned and operated Graham, Peardon and McHoul Funeral Home in Hyde Park for several years and Sperry & McHoul Funeral Home in North Attleboro. He lived above the Dorchester funeral home for over 62 years where he was able to keep a ‘cricital’ eye on operations long after the next generation McHoul was operating the home. Al was past president of the Kilwinning Club in Boston and past master of Union Lodge AF & AM in Dorchester/Milton where he was awarded his 60-year pin in September of 2014. He was a longtime member of the Shriner’s Aleppo Temple AAONMS in Wilmington and helped with their fundraising for Shriner’s Hospitals. He was a longtime active member of All Saints Episcopal Church in the Ashmont section of Dorchester and he served as president of St. Augustine’s Camp in Foxboro which was run by the Cowley Fathers from Cambridge. Affectionately known as “Pop” or “Papa”, he helped out at the funeral homes even continuing to embalm and served as an ambassador of the homes even into his 90’s. He was the oldest licensed funeral director in Massachusetts. Al took tremendous care of his wife, Millie, throughout her long struggle with Alzheimer’s and he never lost his sense of humor or directness when interacting with people. He was extremely proud of everyone in his family and inspired a legacy of funeral directors including his three sons, two daughters-in-law, four grandchildren, two grandchildren-in-law and a great-grandchild to all follow his path in funeral service, with surely more to come. He also mentored through apprenticeships or in their early careers numerous funeral directors that went on to own and/or operate their own funeral homes throughout Massachusetts and beyond. He loved music, particularly that of his grandchildren and the organ at All Saints Church. He developed a love of boxing when he learned the craft on a boxing team in the CCC during the Great Depression. Al was extremely proud of his Scottish heritage and would fly the Scottish flag over the funeral home in Dorchester. He also made many trips to Scotland with Millie and friends. In the years of Millie’s illness when they were unable to travel Al took up drawing. He drew many scenes of beaches, cottages, birds and such and had them made into postcards which he mailed to family and friends. Al is survived by two sons: Douglas A. McHoul and his wife Marikay of Hopewell Junction, NY and Vieques, PR and Donald A. McHoul and his wife Barbara of Cumberland, RI and Hollywood, FL; a devoted daughter-in-law, Anne McHoul of Plymouth; 13 grandchildren, 43 great-grandchildren, 4 great-great-grandchildren and several nieces and nephews. He was father of the late David A. McHoul who passed away in 2005 and he was predeceased by five siblings. Visiting hours will be held on Tuesday, March 29 from 4-7 p.m. in the Sperry & McHoul Funeral Home, 15 Grove Street, North Attleboro. A funeral Mass will be celebrated on Wednesday, March 30 at 10 a.m. at St. Mary’s Church, 14 Park Street, North Attleboro. Committal services will follow at Blue Hill Cemetery in Braintree. In lieu of flowers, donations may be made in Al's name to the American Heart Association c/o Jamie O'Hanlon, 11 Cardinal Circle, North Attleboro, MA 02760.

NORTH ATTLEBORO &#8211; Alexander Fraser McHoul passed away on Sunday, March 13, 2016 in his 99th year of life surrounded by his loving family. He cherished over 72 years of marriage to Mildred (Hennessy) McHoul before her death in 2009. Born... View Obituary & Service Information

The family of Mr. Alexander Fraser McHoul created this Life Tributes page to make it easy to share your memories.

Send flowers to the McHoul family.