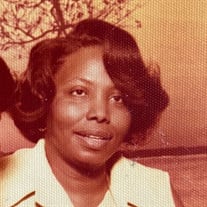 On Sunday morning, July 18, 2021, after a lengthy battle with her health, Aida Kay Allen was called home to the Lord. She was affectionately known to most as “Tia” (‘Aunt’ in Spanish). She was born on August 20, 1938, in La Ceiba, Honduras, C.A., to Beatrice Jeffers Smith Johnson (deceased) and Alric Arlington Johnson, Sr. (deceased). Aida attended public school in La Ceiba until the age of 17, when she moved to Puerto Cortes, Honduras. There, she married Mr. Laymack Allen (deceased). From their union she became the proud mother of her first-born child, Ida Darnell Allen, known to her friends and family as “Dan.” In 1965, Tia immigrated to the U.S., settling in Boston, MA, where she became a domestic worker for several years. Later she met her soulmate Derek Raymond Coleman (deceased) and soon had her subsequent children Alston, April, and Suyupa. Tia’s life treasures were her children and later her grandchildren--she lived her life for them. She instilled the value of “family togetherness” by starting the tradition of family dinners after church every Sunday. In 1980, Tia began working at Massachusetts General Hospital where she worked as a Dietary Aide for many years until her retirement. She was loved and appreciated by her co-workers for her kind and compassionate personality. Before working at Mass General, Tia provided daycare from her home for her friend’s children. She returned to those roots in her retirement, taking care of her youngest grandchildren as a labor of love. Tia’s favorite hobbies were cooking and baking. She became well known for her famous “Caramel Cake,” Pine cookies, and beans and rice. She was also well known for her witty quotes and jokes and encouragement. She always advised her kids and grandchildren to, “Keep your heads up and always put God first.” She loved her telenovelas and reading her Bible. She made up a rhyme to let everyone know her favorite color was blue. She would say, “Blue is true and I love you.” Tia believed in looking her best. She loved getting her hair done, was always well-manicured, and was a sharp dresser. When Tia smiled, everyone smiled. In her soft-spoken, humble way anyone she met knew they were welcomed and loved. Tia loved to be with her family and friends. Even during her illness she was a trooper and would not miss any family gatherings. To strangers and family alike she would instill confidence in them with the saying, “When you got it, you got it!” or “Cuando lo tiene, lo tiene!” More than anything, Tia loved the Lord with all her heart. In her last days, she knew He was preparing her to come home. She often recited the 23rd Psalm and sang her favorite songs, including I Surrender All and When Jesus Calls I Want To Be Ready. She was a member of Mount Olive Temple of Christ, under the leadership of Susie B. Thomas, which is now Kingdom Builders Worship Center where Tia was baptized by Bishop Robert C. Perry. She loved going to church with her children and grandchildren. At the church bake sales there would be no slices sold, as there was always competition to purchase her entire “Caramel Cake.” Tia leaves to mourn and cherish her four children: Ida Darnell Allen, Alston Laymack Allen, April Anita Noel, Suyapa Beatrice Allen; Brothers: Alric A. Johnson Jr. (deceased) and Arthur Lennon Johnson (deceased); Grandchildren: Jessica Allen, Sheldon Noel, Samantha Noel, Jalisa Allen, Amaya Allen, Daysia Allen, Seth Noel, and Alayshia Allen; Her two nieces: Sally Darville (Boston, MA), Brenda Major Johnson (Florida); Nephews: Arturo Johnson (New York), Martin Johnson, Andrew Johnson, Danilo Johnson (Texas), Rolando Johnson (Bahamas), and Daniel Johnson (Florida); Aunt: Geraldine Forbes (New York); God-children: Richard Frederick, Justin Cox, Georgeanna Isles, and Lizzeth and Step Brown; and a host of many more family and friends.

The family of Aida Kay Allen created this Life Tributes page to make it easy to share your memories.

Send flowers to the Allen family.